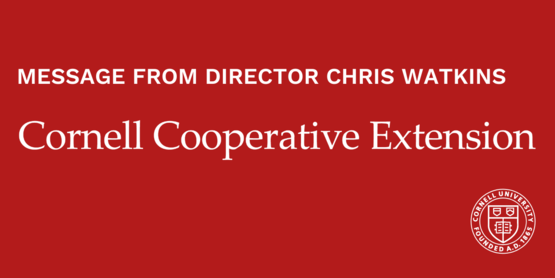 Statement from CCE Director Chris Watkins regarding the shooting in Buffalo

Once again, we are reminded of the death, destruction, and suffering borne out of white supremacy and white nationalism. This time the neighborhood under assault was not some far-off community in Texas, Michigan, or California, but rather a community in our own backyard – Buffalo, New York. The unsuspecting targets of this latest racist hate crime were everyday folks going about their everyday existence in a local supermarket. The people who call the predominantly Black neighborhood on the East Side of Buffalo home were targeted at the Tops Supermarket and singled out because they were Black.


Cornell Cooperative Extension strongly denounces this past Saturday’s racist hate crime in which 10 people were murdered and three others wounded in one of the only grocery stores on Buffalo’s East Side. We extend our condolences to the families of those gunned down by an 18-year-old white man with a heart filled with hate and a mind consumed with the poison of white supremacy and racism. And while our hearts and prayers are with all of those impacted by this heinous act of violence, we recognize that hearts and prayers alone will not counteract the disease of white supremacy and racism intent on eliminating Black lives, Black excellence, and Black joy.

It is with a deep understanding of the impact of the latter that we will continue to challenge the racist rhetoric, fearmongering, and scapegoating that fueled this deadly assault. We will continue to actively undo the living legacy of white supremacy and its day-to-day manifestations through our ongoing anti-racist work as an organization. It is through the challenging work of transforming hearts and minds, behaviors, and holding ourselves accountable to communities of color, that we will uproot white supremacy, dismantle structural racism, and achieve long-lasting change rooted in dignity, respect, and equity for all members of our community. We exhort all CCE staff to actively engage with and contribute to our ongoing efforts to create a beloved community of relationship, dialogue, and understanding.

We are currently working with the College of Agriculture and Life Science (CALS), Cornell Cooperative Extension of Erie County and Niagara County to coordinate food distribution efforts to individuals in the East Buffalo neighborhood impacted by this tragedy.

Below, we honor the memory of the victims of this hate crime by sharing the names of those who died as provided by Peace of the City. Please also find resources on how we can support the community of East Buffalo, increase awareness and understanding of the dynamics that contributed to this racist mass shooting – including resources for talking with children, and opportunities to take immediate action:

Aaron Salter Jr., 55
A retired police lieutenant who spent decades with the Buffalo Police Department. While working as a security guard at the Tops store, he engaged the shooter's assault weapon with his handgun.

Ruth Whitfield, 86
Was shopping at the Tops store when she was shot and killed. Her daughter, Robin, described her mother as her best friend.

Pearl Young, 77
Was grocery shopping after grabbing lunch with her sister-in-law when she was shot and killed.

Roberta A. Drury, 32
Moved back to Buffalo to help her brother recover from a bone marrow transplant necessary to beat his cancer.

Heyward Patterson, 67
A deacon at a Buffalo church and had gone to a soup kitchen before going to the Tops store. Pastor Russell Bell of State Tabernacle Church of God in Christ said Bell cleaned the church and would do whatever was needed.

Celestine Chaney, 65
A breast cancer survivor, which is prompting her family to ask people to wear pink ribbons in her honor. She shopped twice a month with her only son, Wayne Jones.

Andre Mackneil, 53
From Auburn, New York, and was in town visiting relatives and was picking up a surprise birthday cake for his grandson.

Geraldine Talley, 62
Worked as an executive assistant for years; "loved everybody" and was an amazing sister, mother, and aunt.